The Wider North - opportunities and challenges 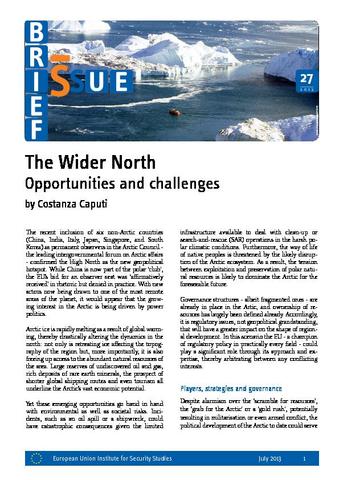 The recent inclusion of six non-Arctic countries (China, India, Italy, Japan, Singapore, and South Korea) as permanent observers in the Arctic Council - the leading intergovernmental forum on Arctic affairs - confirmed the High North as the new geopolitical hotspot. With new actors now being drawn to one of the most remote areas of the planet, it would appear that the growing interest in the Arctic is being driven by power politics. Arctic ice is rapidly melting as a result of global warming, thereby drastically altering the dynamics in the north: not only is retreating ice affecting the topography of the region but, more importantly, it is also freeing up access to the abundant natural resources of the area. Large reserves of undiscovered oil and gas, rich deposits of rare earth minerals, the prospect of shorter global shipping routes and even tourism all underline the Arctic’s vast economic potential.     Yet these emerging opportunities go hand in hand with environmental as well as societal risks. Incidents, such as an oil spill or a shipwreck, could have catastrophic consequences given the limited infrastructure available to deal with clean-up or search-and-rescue (SAR) operations in the harsh polar climatic conditions. Furthermore, the way of life of native peoples is threatened by the likely disruption of the Arctic ecosystem. As a result, the tension between exploitation and preservation of polar natural resources is likely to dominate the Arctic for the foreseeable future.

Feed the world? The challenges of global food security