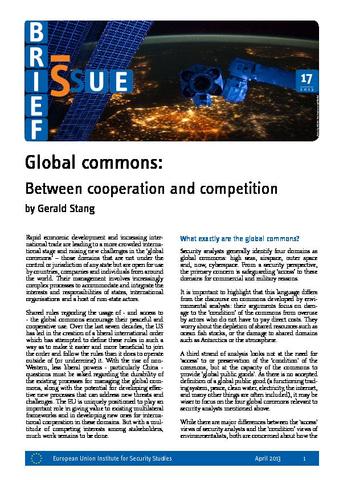 Rapid economic development and increasing international trade are leading to a more crowded international stage and raising new challenges in the ‘global commons’ – those domains that are not under the control or jurisdiction of any state but are open for use by countries, companies and individuals from around the world. Their management involves increasingly complex processes to accommodate and integrate the interests and responsibilities of states, international organisations and a host of non-state actors.
Shared rules regarding the usage of - and access to - the global commons encourages their peaceful and cooperative use. Over the last seven decades, the US has led in the creation of a liberal international order which has attempted to define these rules in such a way as to make it easier and more beneficial to join the order and follow the rules than it does to operate outside of (or undermine) it. With the rise of non-Western, less liberal powers - particularly China - questions must be asked regarding the durability of the existing processes for managing the global commons, along with the potential for developing effective new processes that can address new threats and challenges. The EU is uniquely positioned to play an important role in giving value to existing multilateral frameworks and in developing new ones for international cooperation in these domains. But with a multitude of competing interests among stakeholders, much work remains to be done.