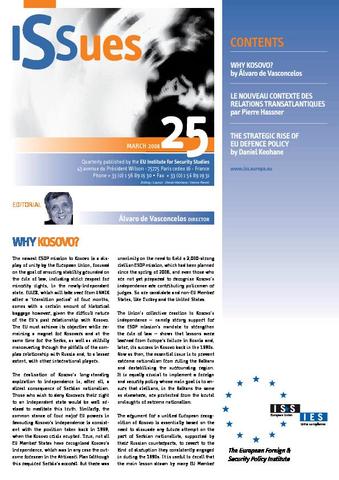 The newest ESDP mission to Kosovo is a display of unity by the European Union, focused on the goal of ensuring stability grounded on the rule of law, including strict respect for minority rights, in the newly-independent state. EULEX, which will take over from UNMIK after a ‘transition period’ of four months, comes with a certain amount of historical baggage however, given the difficult nature of the EU’s past relationship with Kosovo. The EU must achieve its objective while remaining a magnet for Kosovars and at the same time for the Serbs, as well as skilfully manoeuvring through the pitfalls of the complex relationship with Russia and, to a lesser extent, with other international players.
The realisation of Kosovo’s long-standing aspiration to independence is, after all, a direct consequence of Serbian nationalism. Those who wish to deny Kosovars their right to an independent state would be well advised to meditate this truth. Similarly, the common stance of four major EU powers in favouring Kosovo’s independence is consistent with the position taken back in 1999, when the Kosovo crisis erupted. True, not all EU Member States have recognised Kosovo’s independence, which was in any case the outcome foreseen in the Ahtisaari Plan (although this required Serbia’s accord). But there was unanimity on the need to field a 2,000-strong civilian ESDP mission, which had been planned since the spring of 2006, and even those who are not yet prepared to recognise Kosovo’s independence are contributing policemen or judges. So are candidate and non-EU Member States, like Turkey and the United States.
The Union’s collective reaction to Kosovo’s independence – namely strong support for the ESDP mission’s mandate to strengthen the rule of law – shows that lessons were learned from Europe’s failure in Bosnia and, later, its success in Kosovo back in the 1990s. Now as then, the essential issue is to prevent extreme nationalism from ruling the Balkans and destabilising the surrounding region. It is equally crucial to implement a foreign and security policy whose main goal is to ensure that civilians, in the Balkans the same as elsewhere, are protected from the brutal onslaughts of extreme nationalism.