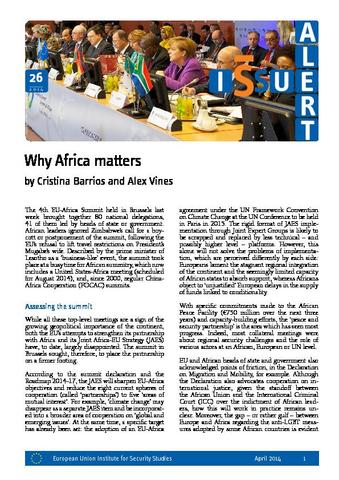 The 4th EU-Africa Summit held in Brussels last week brought together 80 national delegations,  41 of them led by heads of state or government. African leaders ignored Zimbabwe’s call for a boycott or postponement of the summit, following the EU’s refusal to lift travel restrictions on President’s Mugabe’s wife. Described by the prime minister of Lesotho as a ‘business-like’ event, the summit took place at a busy time for African summitry, which now includes a United States-Africa meeting (scheduled for August 2014), and, since 2000, regular China-Africa Cooperation (FOCAC) summits.

While all these top-level meetings are a sign of the growing geopolitical importance of the continent, both the EU’s attempts to strengthen its partnership with Africa and its Joint Africa-EU Strategy (JAES) have, to date, largely disappointed. The summit in Brussels sought, therefore, to place the partnership on a firmer footing.