Visit of Helga Schmid to the EUISS 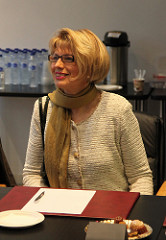 On Friday 25 January, the EUISS was pleased to welcome Ms Helga Schmid, Deputy Secretary General for Political Affairs in the European External Action Service (EEAS) to the Institute for an informal exchange of views with Paris-based think tankers organised by the EUISS. Ms Schmid gave an overview of the current areas of focus for the EEAS, offering an analysis of past achievements and outlining future challenges. In light of her involvement in the international negotiations on the Iranian nuclear issue, which the EU High Representative Catherine Ashton conducts on behalf of the E3+3 group, Ms Schmid offered an insight into her experiences with her Iranian counterparts, outlining the complexity of the ongoing negotiations. In addition, she shared some of her views on the work of the Quartet for the Middle East Peace Process, and also spoke of the importance of the continued development of the EU’s relationships with strategic partners such as South Korea and Indonesia. Ms Schmid concluded her visit to the EUISS by accepting questions and comments from invitees which touched upon issues ranging from EU relations with Russia and the Eastern neighbourhood to the recent developments in Mali, where i.a. the EU is set to establish a training mission for the Malian Armed Forces, and the ongoing negotiations with Tehran.