The US midterm elections: implications for the transatlantic agenda 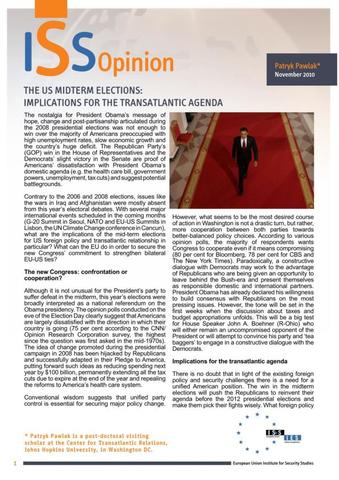 The nostalgia for President Obama’s message of hope, change and post-partisanship articulated during the 2008 presidential elections was not enough to win over the majority of Americans preoccupied with high unemployment rates, slow economic growth and the country’s huge deficit. The Republican Party’s (GOP) win in the House of Representatives and the Democrats’ slight victory in the Senate are proof of Americans’ dissatisfaction with President Obama’s domestic agenda (e.g. the health care bill, government powers, unemployment, tax cuts) and suggest potential battlegrounds.

Contrary to the 2006 and 2008 elections, issues like the wars in Iraq and Afghanistan were mostly absent from this year’s electoral debates. With several major international events scheduled in the coming months (G-20 Summit in Seoul, NATO and EU-US Summits in Lisbon, the UN Climate Change conference in Cancun), what are the implications of the mid-term elections for US foreign policy and transatlantic relationship in particular? What can the EU do in order to secure the new Congress’ commitment to strengthen bilateral EU-US ties?