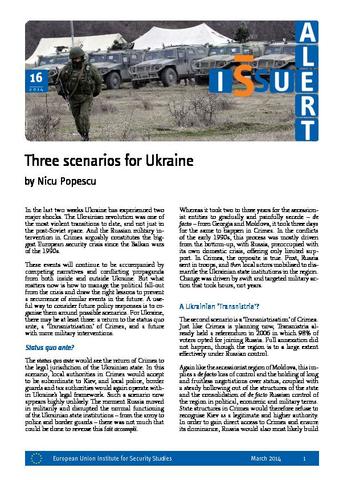 In the last two weeks Ukraine has experienced two major shocks. The Ukrainian revolution was one of the most violent transitions to date, and not just in the post-Soviet space. And the Russian military intervention in Crimea arguably constitutes the biggest European security crisis since the Balkan wars of the 1990s.

These events will continue to be accompanied by competing narratives and conflicting propaganda from both inside and outside Ukraine. But what matters now is how to manage the political fall-out from the crisis and draw the right lessons to prevent a recurrence of similar events in the future. A useful way to consider future policy responses is to organise them around possible scenarios. For Ukraine, there may be at least three: a return to the status quo ante, a ‘Transnistrisation’ of Crimea, and a future with more military interventions.