Taiwan after the elections: what next? 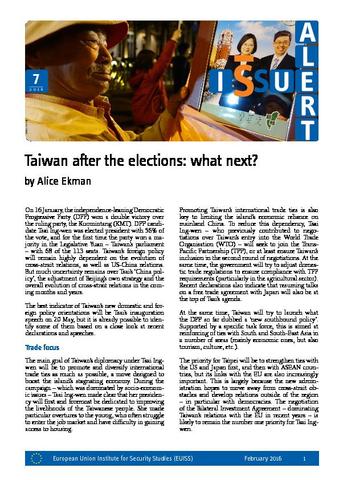 On 16 January, the independence-leaning Democratic Progressive Party (DPP) won a double victory over the ruling party, the Kuomintang (KMT). DPP candidate Tsai Ing-wen was elected president with 56% of the vote, and for the first time the party won a majority in the Legislative Yuan – Taiwan’s parliament – with 68 of the 113 seats. Taiwan’s foreign policy will remain highly dependent on the evolution of cross-strait relations, as well as US-China relations. But much uncertainty remains over Tsai’s ‘China policy’, the adjustment of Beijing’s own strategy and the overall evolution of cross-strait relations in the coming months and years.