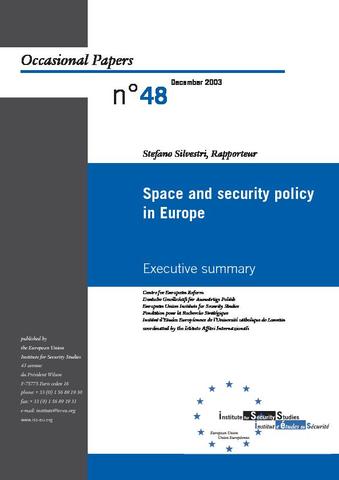 Space is a strategic asset, and its importance both in terms of technology and security cannot be overestimated. Firstly, space technology is at the cutting-edge, acting as a catalyst for technological progress and generating applications that are crucial for the functioning of modern societies. Secondly, it is the example par excellence of a dual-use technology. Its applications are normally multi-purpose, and space operations can be seen as a continuum, including civil and military as well as security and defence functions. In consequence, space assets represent key instruments for a comprehensive approach to security. However, Europe still has difficulties responding to the importance of space in general and its security implications in particular. Granted, recent initiatives like Galileo and GMES are encouraging, but they cannot hide that important structural deficiencies persist. Europe’s space sector is facing not only a lack of funding, but also political and institutional fragmentation that makes efficient and effective solutions difficult to achieve. In this context, the clear distinction between military and civil space activities is particularly important, since it is increasingly in contradiction with technological and security evolutions. Having this in mind, the IAI in Rome brought together an international consortium of Think Tanks to finalise a research program for the European Space Agency (ESA) on the perspectives of space in the European security and defence policy. The research team consisted of six European research institutes, including the EUISS. Its task was to analyze how the various actors in Europe deal with space and how to promote convergence towards a European space security policy. To achieve this objective, the consortium chose a two-step-approach: It investigated the political, institutional and economic aspects of the various national and European space policies. This assessment is particularly important, since there is not only an unbalanced distribution of space activities and funding in Europe, but also a sharp division between civil European programs and national military programs. Then, based on this ‘inventory’, the research team evaluated the perspectives for a common European space security policy and developed concrete proposals for political action. The consortium presented its findings in early December 2003 at an international conference in Rome. This Occasional Paper contains the Executive Summary and the Conclusions of the report. Given the significance of the issue and its implication for CFSP/ ESDP, the EUISS felt it important to publish them and make them available to a wider public.

Towards a European Defence Equipment Market?