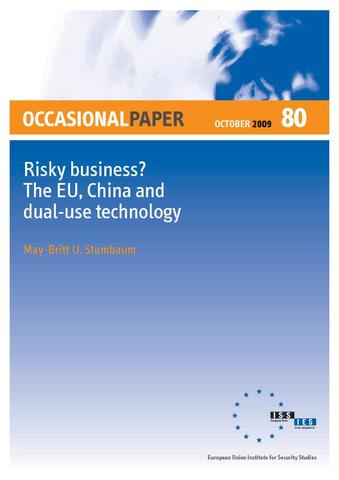 This paper argues that it is high time for the European Union to adopt a proactive policy of managing the risks of sensitive technology transfer to the People’s Republic of China (PRC). On the basis of a common understanding of the challenges of transferring dual-use technology, economically, politically and security-wise, the European Union can optimise benefits from opportunities available in the promising and technologically rapidly advancing Chinese market. China’s rise as a high-tech military power is central to US security concerns, while a European debate on the implications of a rising China beyond the economic sphere is conspicuous by its absence. Concerns about Intellectual Property Rights (IPR) have dominated any debate on high technology transfers to the PRC, with less attention being paid to the ‘dual use’ nature of many of these technologies that can be utilised in both civilian and military applications. Unlike the United States, the European Union has no overview on the amount and generation of sensitive technology exported to the PRC. European policy on dual-use technologies is fragmentary at best, while conflicting export regimes and shrinking investments in research and education throughout the European Union are putting the EU’s technological lead at risk. This pressure further increases the need to find outside revenues to fund innovation and the next generation of technology – which could come from the expanding Chinese market. Given the central role of dual-use technologies in today’s information-based warfare, the EU’s traditionally high level of technology exports to China has become a sensitive topic across the Atlantic in recent years, as was highlighted by the clash over the potential lifting of the EU arms embargo in 2004/2005. In sum, dual-use technology transfers touch on aspects of competitiveness and innovative capacity, market access and security concerns. A proactive policy needs to be based on a common understanding of China’s potential as a military superpower and of its likely impact on the European Union, the EU’s policies and its relationship with the United States. A proactive policy needs to merge security, economic and competition aspects in order to sustain and extend the EU’s global influence. This influence, especially in the context of the currently intensifying arms race in space, can only be materialised by a political vision, in-depth knowledge of the other parties and a sound base of innovative technology within the European Union. In a post-Cold War world, countries like China represent the greatest opportunities and risks at the same time. The United States has responded to this ambivalent situation by trying out a system of balancing opportunities against risks in its ‘Validated End User’ regulation, first introduced in June 2007. The EU needs to follow with a proactive policy of ‘managing risks’ that helps to (i) further assist China in its transformation process and encourage China to become a ‘responsible stakeholder’ and partner in the international system; (ii) continuously benefit from China’s development and progress while keeping European countries competitive; and (iii) accompany and monitor security-related developments that go hand-in-hand with China’s rise. This paper therefore recommends that the European Union should (a) work towards a common European strategic assessment of China’s ambitions and future global role and the implications for EU policies; (b) strive towards improving the internal coordination of EU external policy-making that integrates commercial and military aspects of future technologies and policies; (c) continue engaging with China in high technology cooperation, while maintaining vigilance regarding the risks involved and beefing up its own investments in education and research as outlined in the Lisbon Strategy in order to remain competitive in innovation and high technology.