South Sudan: the cost of conflict 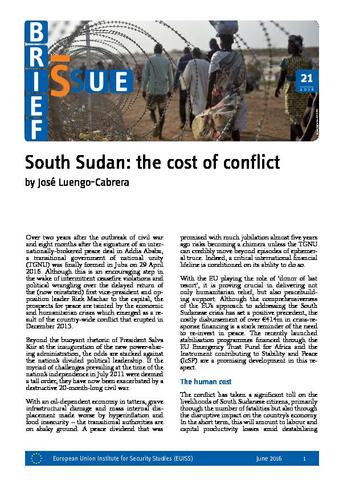 Over two years after the outbreak of civil war and eight months after the signature of an internationally-brokered peace deal in Addis Ababa, a transitional government of national unity (TGNU) was finally formed in Juba on 29 April 2016. Although this is an encouraging step in the wake of intermittent ceasefire violations and political wrangling over the delayed return of the (now reinstated) first vice-president and opposition leader Riek Machar to the capital, the prospects for peace are tainted by the economic and humanitarian crises which emerged as a result of the country-wide conflict that erupted in December 2013. Beyond the buoyant rhetoric of President Salva Kiir at the inauguration of the new power-sharing administration, the odds are stacked against the nation’s divided political leadership. If the myriad of challenges prevailing at the time of the nation’s independence in July 2011 were deemed a tall order, they have now been exacerbated by a destructive 20-month-long civil war.