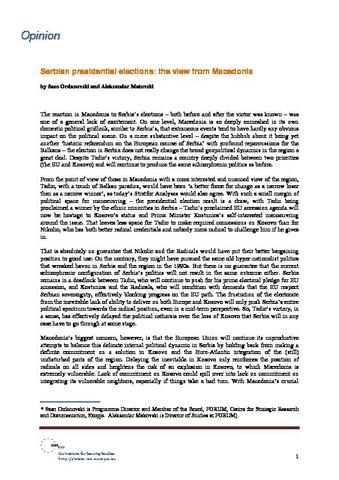 The reaction in Macedonia to Serbia’s elections – both before and after the victor was known – was one of a general lack of excitement. On one level, Macedonia is so deeply enmeshed in its own domestic political gridlock, similar to Serbia’s, that extraneous events tend to have hardly any obvious impact on the political scene. On a more substantive level – despite the hubbub about it being yet another ‘historic referendum on the European course of Serbia’ with profound repercussions for the Balkans – the election in Serbia does not really change the broad geopolitical dynamics in the region a great deal. Despite Tadic’s victory, Serbia remains a country deeply divided between two priorities (the EU and Kosovo) and will continue to produce the same schizophrenic politics as before.

From the point of view of those in Macedonia with a more interested and nuanced view of the region, Tadic, with a touch of Balkan paradox, would have been ‘a better force for change as a narrow loser than as a narrow winner’, as today’s Stratfor Analyses would also agree. With such a small margin of political space for manoeuvring – the presidential election result is a draw, with Tadic being proclaimed a winner by the ethnic minorities in Serbia – Tadic’s proclaimed EU accession agenda will now be hostage to Kosovo’s status and Prime Minister Kostunica’s self-interested manoeuvring around the issue. That leaves less space for Tadic to make required concessions on Kosovo than for Nikolic, who has both better radical credentials and nobody more radical to challenge him if he gives in.

That is absolutely no guarantee that Nikolic and the Radicals would have put their better bargaining position to good use. On the contrary, they might have pursued the same old hyper-nationalist politics that wreaked havoc in Serbia and the region in the 1990s. But there is no guarantee that the current schizophrenic configuration of Serbia’s politics will not result in the same outcome either. Serbia remains in a deadlock between Tadic, who will continue to push for his prime electoral pledge for EU accession, and Kostunica and the Radicals, who will condition with demands that the EU respect Serbian sovereignty, effectively blocking progress on the EU path. The frustration of the electorate from the inevitable lack of ability to deliver on both Europe and Kosovo will only push Serbia’s entire political spectrum towards the radical position, even in a mid-term perspective. So, Tadic’s victory, in a sense, has effectively delayed the political catharsis over the loss of Kosovo that Serbia will in any case have to go through at some stage.