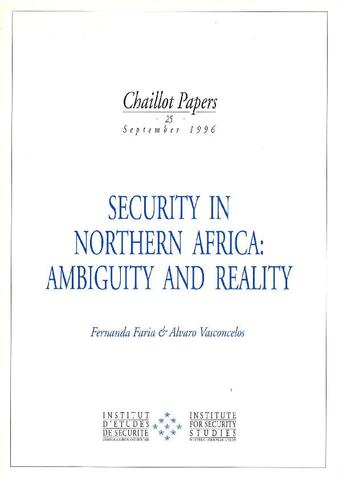 In December 1994, the WEU Permanent Council gave the Institute for Security Studies the task of analysing the security and defence policies of the Maghreb countries and Egypt, in liaison with security institutes in those countries. This was to become an addition to the Institute's continuing work on Mediterranean security. A year later, the Barcelona Conference established that networking among foreign policy institutes was to become a component of the Euro-Mediterranean partnership. An earlier version of this Chaillot Paper was written as a background paper by the Instituto de Estudos Estratégicos e Internacionais (IEEI), Lisbon, for a seminar on 'Security and defence policies of the Maghreb countries and Egypt' held at the Institute on 9-10 March 1995. The basic argument of this paper commissioned by the Institute is that differences in language and perceptions of security between the two shores of the Mediterranean remain. In this area, the very notion of security, while not identical in all countries, embraces a wider concept than elsewhere. Policies and strategies are suggested that take account of the special conditions in the region. The second part of the paper includes individual studies of non-WEUMediterranean states that are engaged in a security dialogue with WEU, with the addition of Libya. Persuaded as we are that the exchange of information and views on security and defence issues will contribute to a better mutual understanding of perceptions, the publication of this paper will, we hope, provide new inputs to the continuing debate on Mediterranean security, with a more active contribution by all parties concerned.