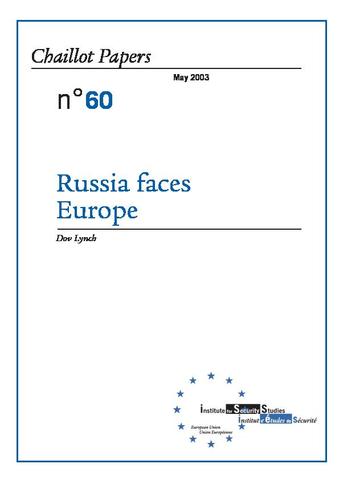 Despite the crisis in Iraq, President Vladimir Putin has accelerated a strategy of alignment between Russia and the states and security organisations of the Euro-Atlantic community. In this, Moscow has dropped previously held notions of multipolarity in which Russia figured as an independent, if enfeebled, ‘pole’, balancing off other ‘poles’ in international affairs. Under Putin, Russia is seen to retain a unique position in world affairs, but Russian interests are thought best advanced in close alignment with the Euro-Atlantic community rather than in opposition. Putin’s foreign policy is founded on a dispassionate recognition of internal weakness and limited ability to control external developments. In blunt terms, Russia has become more an object of international relations than the subject it once was. With threats arising mainly internally and linking with challenges from the south and east, Moscow perceives the West as a source of solutions to many of its problems. Russia’s foreign policy remains riddled with ambiguities in orientation within the Euro-Atlantic community – between the United States and Europe, ESDP and NATO, unilateralism and multilateralism. However, the basic thrust is clear: Russia is open to far deeper security cooperation than ever before in the post-Cold War era. Since 11 September, the United States and NATO have succeeded in taking security relations further forward with Russia. The EU has not, mainly because it has not tried to do so. The EU is caught up in a massive transformation process, which leaves little time to pursue coherent policies towards third parties. None the less, the EU must start to consider proactively how to develop the security dialogue with Russia. Enlargement will literally bring the EU and Russia ever closer. Moreover, as the United States withdraws from peacekeeping and NATO is transformed, the EU will become Europe’s peacekeeper. Its political dialogue with Russia must focus on questions of direct and urgent interest to both parties. Peace support operations fit these criteria.