The question of Serbia 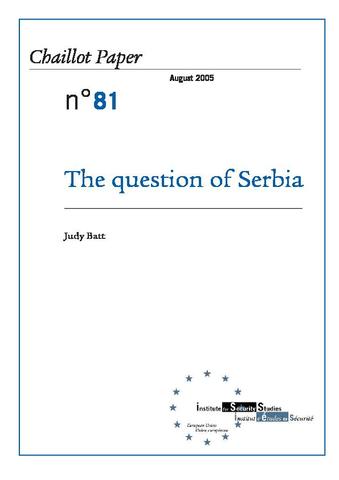 Five years after the fall of Slobodan Milosevic, it is still not clear where Serbia is heading. Indeed, it is not yet clear what, or even where Serbia is. Serbia’s borders and statehood remain open questions: the future status of Kosovo is unresolved and the survival of the State Union with Montenegro in doubt. As long as Serbia does not know what and where it is, its progress towards EU integration will be impeded. The political agenda remains heavily burdened by these open questions, and the baneful legacies of Milosevic’s misrule. These divert politicians’ attention from the equally demanding challenges of preparing for EU integration. Serbia needs to redefine its national identity and statehood in order to become capable of integrating into the EU. Serbia matters. With a population of 7.5 million, it is by far the largest country in the Western Balkans, and, as such, of crucial importance for the stability of the whole region. While the Serbs want to ‘join Europe’, they still do not fully trust it, and the feeling is reciprocated. Both sides now need to work to overcome their mutual incomprehension.