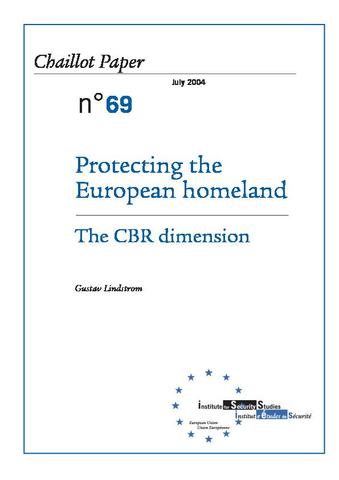 The Sarin attacks carried out by the Japanese cult Aum Shinrikyo in Matsumoto and Tokyo highlighted the threat posed by non-state actors equipped with non-conventional weapons. Although the number of casualties was limited, the attack signalled a cause for concern. In 2001, the United States was struck by bioterrorism shortly after 11 September. Weapons-grade anthrax was distributed by post, killing five people, making 17 others ill, forcing evacuation of Capitol Hill, shutting down postal delivery, provoking widespread use of prophylactic antibiotics and damaging the economy. An already shocked nation discovered that it was vulnerable to a new kind of threat. While the probability of a chemical, biological or radiological (CBR) attack on the European continent is low, the ramifications of such an attack could be high. Recent arrests in European countries suggest that the likelihood of a CBR attack may be increasing. This Chaillot Paper analyses EU-wide activities in the area of chemical, biological or radiological protection. It provides an overview of the threats facing the EU, summarises policies and preparedness at both the national and EU levels, and offers numerous policy recommendations to increase preparedness across Europe. This paper will be of interest to policy-makers and analysts concerned with issues related to European security and possible future terrorist uses of biological, chemical, and radiological agents.

Enforcing non-proliferation. The European Union and the 2006 BTWC Review Conference