Enforcing non-proliferation. The European Union and the 2006 BTWC Review Conference

01 November 2006
Edited by
With contributions from 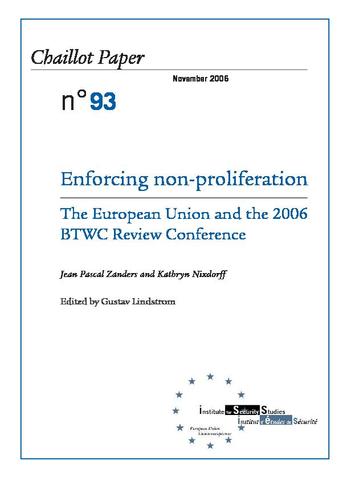 In its 2003 strategy against the proliferation of weapons of mass destruction, the EU underscores that it is ‘committed to the multilateral treaty system’ – considering it the legal and normative stepping stone for all non-proliferation efforts. Among the principal policy objectives outlined in the strategy are to implement and universalise multilateral treaties such as the nuclear Non-Proliferation Treaty (NPT), the Chemical Weapons Convention (CWC), and the Biological and Toxin Weapons Convention (BTWC). With respect to the BTWC, the EU has increased its efforts to promote the universalisation and implementation of the convention since 2005. In February 2006, it adopted a Joint Action in support of the BTWC. Its two main objectives are to advocate the universalisation of the BTWC by promoting the accession of States not Party to the convention and to push for the implementation of the BTWC by the States Parties. This Chaillot Paper focuses on international efforts to prevent biological agents and toxins being developed and used as weapons. It considers the evolution of the BTWC, paying particul-ar attention to the outcomes of the past five review conferences. Its aim is to contribute to current European thinking in the light of the upcoming 6th BTWC Review Conference. Besides examining the evolution of international efforts to promote disarmament, the paper considers challenges to the convention, such as issues of verification and the impact of advances in the field of science and technology. Weaknesses and limitations in current policymaking are identified and analysed. This Chaillot Paper is the latest addition to the Institute’s series of publications on non-proliferation.