Presentation of YES 2014 in Vienna 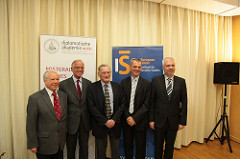 Hosted by the Diplomatic Academy of Vienna, the European Union Institute for Security Studies presented its Yearbook of European of European Security 2014 (YES) on 6 November in the Austrian capital. Following introductory remarks by the respective Directors of the two organisations, presentations were made in both English and German by the EUISS staff responsible for YES 2014. After questions from the audience, presentations were then given by a panel of experts, including EUISS Senior Analyst Florence Gaub, on the troubles confronting both the Union’s immediate neighbourhood and the new foreign policy team in Brussels.