The OSCE in crisis 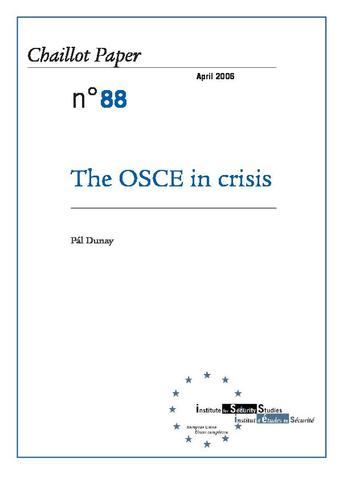 The OSCE is in crisis. There can be no doubt but that the OSCE today, as compared to its heyday during the Cold War and in the mid-1990s, is a far less visible landmark on the European institutional landscape than was formerly the case. This Chaillot Paper seeks to take stock for an EU audience of the background and the evolution of the OSCE, the nature of the crisis which it is currently experiencing, the views of important participating states and the potential for the organisation's reform. The crisis of the OSCE matters to other actors of the European security environment for various reasons. Due to its distinctive composition (comprising 55 participating states from Europe and North America), it has a geographical reach that is more wide-ranging than that of other European and Euro-Atlantic institutions, and a broad security mandate. The OSCE is therefore an important actor on the European security scene at a time when most security problems extend beyond the traditional inter-state realm and notwithstanding the fact that other organisations - primarily the EU - are gradually extending their activity to the same field. As the EU has developed as a foreign policy actor, it has taken on many responsibilities that had previously been assumed by the OSCE. Nevertheless, the organisation remains a vital forum for EU foreign policy and an important plank of member states' vision of Europe's security architecture. In a number of areas, most notably the human dimension, the OSCE remains the EU's first and best recourse. The current crisis of the organisation is important therefore both for member state foreign policy and for the EU Common Foreign and Security Policy (CFSP).