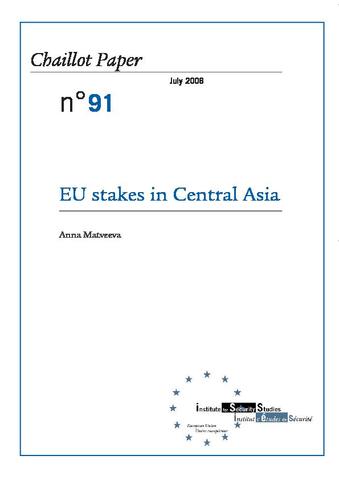 For much of the 1990s, Central Asia was not on the EU radar screen, as the Union was preoccupied with more urgent priorities, such as the Balkans. Lately, however, it has started to matter for the EU. The ongoing European military commitment in Afghanistan, the events in Andijan in Uzbekistan, the violent change of power in Kyrgyzstan – all of these highlight a highly volatile region. This Chaillot Paper seeks to help the EU understand the region better, to define EU priorities and interests and explore how and where the EU should act. Being the poorest and most remote parts of the USSR, the five republics of Central Asia – Kazakhstan, Kyrgyzstan, Tajikistan, Turkmenistan and Uzbekistan – were an international backwater throughout the 1990s. The region rose to prominence first through the involvement of the energy companies, and thanks to the activities of multilateral organisations such as the UN and OSCE. Although the region has achieved some notable successes in peace and stability, state fragility is a real problem and creates a potential for chaos. In particular, the situation in Afghanistan, in whose neighbourhood the new states lie, provides channels for negative and dangerous developments affecting the region such as jihadi ideology, drug trafficking and organised crime. The key threats that the European Security Strategy outlines – terrorism, regional conflicts, state failure and organised crime – are all relevant to Central Asia. The EU now aspires to make its engagement in Central Asia more strategic, and in this context its appointment of a new Special Representative (EUSR) for the region is significant. In support of a rising EU profile, this Chaillot Paper explores how and in which areas the Union may become more active in the region.