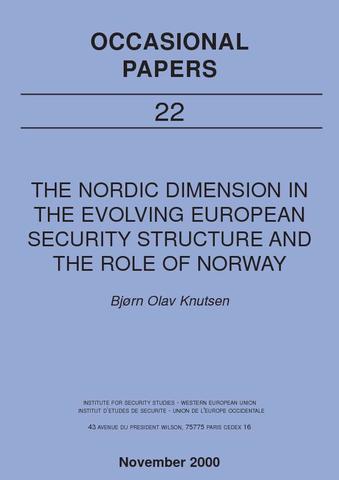 During the Cold War, the Nordic countries tried to develop a political identity by being different from the rest of the bipolar European security order. After the end of the Cold War, this particular identity disappeared when the Nordic countries became involved in the great European security discourses, the most important one of which revolved around the concept of co-operative security. This discourse focused upon how the different European and Euro-Atlantic security-institutions could fulfil the task of building more integrated security arrangements in Europe. Therefore, to an increasing extent the Nordic countries have to relate themselves to a European identity, not a Nordic one. Hence, the traditional factors which were characteristic for the Nordic countries, and which were among the elements that created the ‘Nordic political space’, are becoming relatively less significant. These factors were the Russian-Nordic relationship, the transatlantic relationship and the ‘inner’ political culture connected to isolationism, neutrality and scepticism towards the integration process on the European Continent. The potential difference between the increasing importance of the EU integration process and the three above-mentioned factors introduces a dynamic element which creates a Nordic system-transformation process similar to the European system-transformation process caused by the European integration process. Such process is characterised by increased integration, mutual deference and institutional mingling.
The main message in the paper is that such a system-transformation process is starting to affect Norway too, in that this country is also to an increasing extent adapt itself to the new European security logic. This Norwegian adaptation, however, is caused by changes in a structure-related variable, not an actor-related one. The structure-related variable refers to events in the external environment as e.g. the status of the transatlantic relationship, Russia’s role and place, and the speed and direction of the EU integration process. What has happened since the Franco-British St-Malo meeting in December 1998 is that Norway now ‘strongly supports’ the efforts by the European countries to enhance the role of the EU in the sphere of security and defence. In 1999 the Norwegian government stated that it was ready to enhance its contribution to international crisis-management within an EU and NATO framework. This also implies that the Norwegian government is seeing Norway’s security as interwoven with the security of the member states of the EU and that of the Union itself. But it is important to note that such a change is caused by pressure from Norway’s external environment only, and not as a consequence of a more pro-European attitude of the Norwegians themselves (the actor-related variable).
Such a development implies that the traditional Norwegian focus upon defence as defence against an incoming invasion has to be adapted as well. In that respect the paper investigates a Report issued by the Government in 1999 on the creation of an Armed Forces Task Force so as to increase the Norwegian capacity to take part in Peace Support Operations. But as a non-member of the EU, the main Norwegian concern has been how Norway would take part in the decision-making process. As underlined by State Secretary Espen Barth Eide at the WEU Council of Ministers in May 2000, the Norwegian view is that a ‘pragmatic approach’ should be pursued so as to find the proper institutional arrangements. Due to a more ‘active European policy’ by the Labour government which took office in March 2000 to an ever-increasing extent, we may see a policy whereby Norway underlines that the future of Europe is also the future for Norway.