A new era in Turkish-Armenian relations 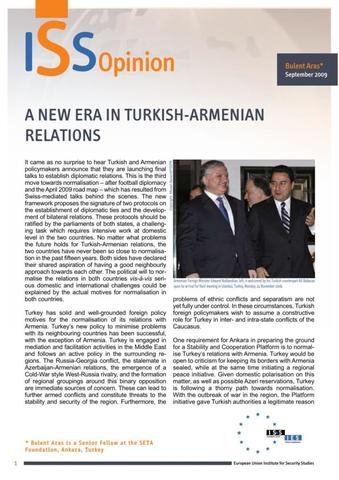 It came as no surprise to hear Turkish and Armenian policymakers announce that they are launching final talks to establish diplomatic relations. This is the third move towards normalisation – after football diplomacy and the April 2009 road map – which has resulted from Swiss-mediated talks behind the scenes. The new framework proposes the signature of two protocols on the establishment of diplomatic ties and the development of bilateral relations.

These protocols should be ratified by the parliaments of both states, a challenging task which requires intensive work at domestic level in the two countries. No matter what problems the future holds for Turkish-Armenian relations, the two countries have never been so close to normalisation in the past fifteen years. Both sides have declared their shared aspiration of having a good neighbourly approach towards each other. The political will to normalise the relations in both countries vis-à-vis serious domestic and international challenges could be explained by the actual motives for normalisation in both countries.

Turkey and the ESDP: towards enhanced cooperation?