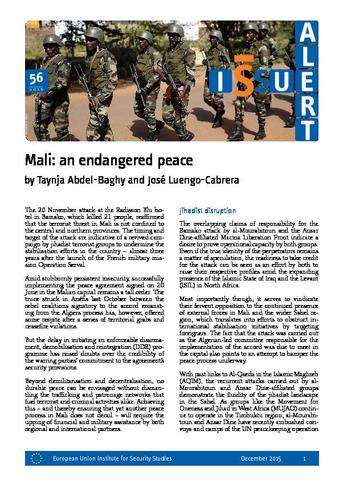 The 20 November attack at the Radisson Blu hotel in Bamako, which killed 21 people, reaffirmed that the terrorist threat in Mali is not confined to the central and northern provinces. The timing and target of the attack are indicative of a revived campaign by jihadist terrorist groups to undermine the stabilisation efforts in the country – almost three years after the launch of the French military mission Operation Serval. Amid stubbornly persistent insecurity, successfully implementing the peace agreement signed on 20 June in the Malian capital remains a tall order.

The truce struck in Anéfis last October between the rebel coalitions signatory to the accord emanating from the Algiers process has, however, offered some respite after a series of territorial grabs and ceasefire violations.