Lebanon between crisis and elections 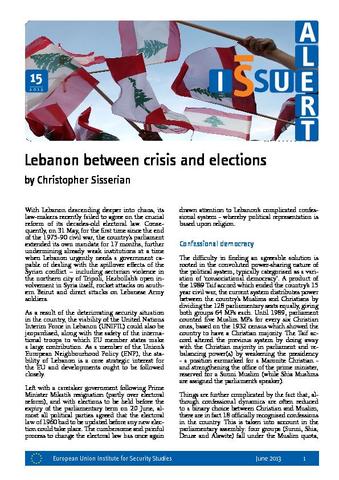 With Lebanon descending deeper into chaos, its law-makers recently failed to agree on the crucial reform of its decades-old electoral law. Consequently, on 31 May, for the first time since the end of the 1975-90 civil war, the country’s parliament extended its own mandate for 17 months, further undermining already weak institutions at a time when Lebanon urgently needs a government capable of dealing with the spillover effects of the Syrian conflict – including sectarian violence in the northern city of Tripoli, Hezbollah’s open involvement in Syria itself, rocket attacks on southern Beirut and direct attacks on Lebanese Army soldiers.
As a result of the deteriorating security situation in the country, the viability of the United Nations Interim Force in Lebanon (UNIFIL) could also be jeopardised, along with the safety of the international troops to which EU member states make a large contribution. As a member of the Union’s European Neighbourhood Policy (ENP), the stability of Lebanon is a core strategic interest for the EU and developments ought to be followed closely.