Kosovo: the era of the EU protectorate dawns 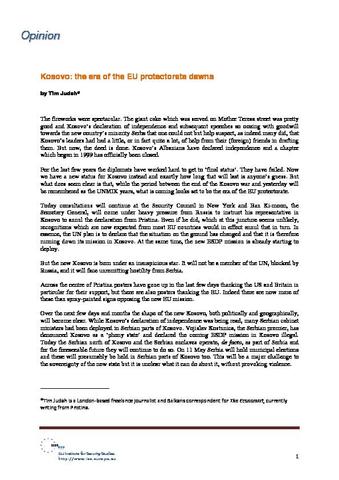 The fireworks were spectacular. The giant cake which was served on Mother Teresa street was pretty good and Kosovo’s declaration of independence and subsequent speeches so oozing with goodwill towards the new country’s minority Serbs that one could not but help suspect, as indeed many did, that Kosovo’s leaders had had a little, or in fact quite a lot, of help from their (foreign) friends in drafting them. But now, the deed is done. Kosovo’s Albanians have declared independence and a chapter which began in 1999 has officially been closed.

For the last few years the diplomats have worked hard to get to ‘final status’. They have failed. Now we have a new status for Kosovo instead and exactly how long that will last is anyone’s guess. But what does seem clear is that, while the period between the end of the Kosovo war and yesterday will be remembered as the UNMIK years, what is coming looks set to be the era of the EU protectorate.

Today consultations will continue at the Security Council in New York and Ban Ki-moon, the Secretary General, will come under heavy pressure from Russia to instruct his representative in Kosovo to annul the declaration from Pristina. Even if he did, which at this juncture seems unlikely, recognitions which are now expected from most EU countries would in effect annul that in turn. In essence, the UN plan is to declare that the situation on the ground has changed and that it is therefore running down its mission in Kosovo. At the same time, the new ESDP mission is already starting to deploy.