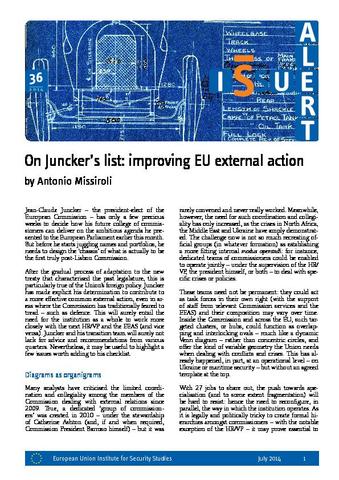 Jean-Claude Juncker – the president-elect of the European Commission – has only a few precious weeks to decide how his future college of commissioners can deliver on the ambitious agenda he presented to the European Parliament earlier this month. But before he starts juggling names and portfolios, he needs to design the ‘chassis’ of what is actually to be the first truly post-Lisbon Commission. After the gradual process of adaptation to the new treaty that characterised the past legislature, this is particularly true of the Union’s foreign policy. Juncker has made explicit his determination to contribute to a more effective common external action, even in areas where the Commission has traditionally feared to tread – such as defence. This will surely entail the need for the institution as a whole to work more closely with the next HR/VP and the EEAS (and vice versa). Juncker and his transition team will surely not lack for advice and recommendations from various quarters. Nevertheless, it may be useful to highlight a few issues worth adding to his checklist.