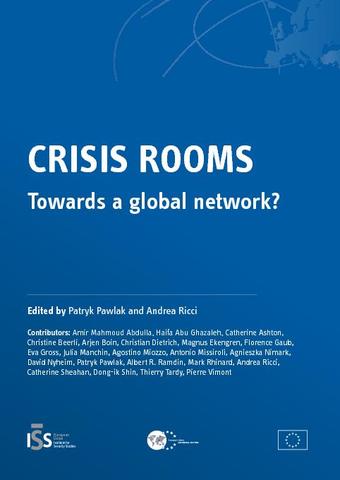 In recent years, the EU’s crisis management policy has gradually broadened in range and scope, as it seeks to adapt its response mechanisms to the increasingly complex crises facing the world today. In this regard a major role is played by crisis coordination centres or ‘crisis rooms’ which are generally perceived as secluded high-tech locations where huge TV monitors and computer screens collect and process data, imagery and information from the outside world in real time, and convey their findings to decision-makers 24/7. This book brings together key elements from an international conference devoted to challenges and opportunities for cooperation between crisis rooms that was organised by the European External Action Service in December 2013. The conference brought together perspectives from leading regional and international organisations and represented a major stepping stone as well as a springboard for the ongoing efforts of crisis responders worldwide to establish their own ‘security community’.

Handle with care: crowd-sourcing and non-proliferation

Upgrading the Union’s response to disasters