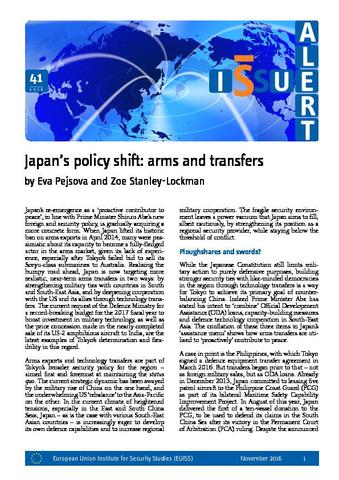 Japan’s re-emergence as a ‘proactive contributor to peace’, in line with Prime Minister Shinzo Abe’s new foreign and security policy, is gradually acquiring a more concrete form. When Japan lifted its historic ban on arms exports in April 2014, many were pessimistic about its capacity to become a fully-fledged actor in the arms market, given its lack of experience, especially after Tokyo’s failed bid to sell its Soryu-class submarines to Australia. Realising the bumpy road ahead, Japan is now targeting more realistic, near-term arms transfers in two ways: by strengthening military ties with countries in South and South-East Asia, and by deepening cooperation with the US and its allies through technology transfers.

EU and Japan: stepping up the game