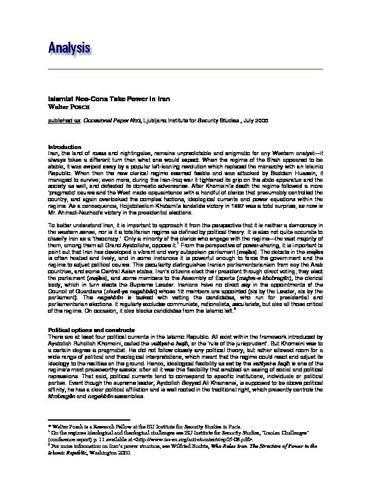 Iran, the land of roses and nightingales, remains unpredictable and enigmatic for any Western analyst-it always takes a different turn than what one would expect. When the regime of the Shah appeared to be stable, it was swiped away by a popular left-leaning revolution which replaced the monarchy with an Islamic Republic. When then the new clerical regime seemed feeble and was attacked by Saddam Hussein, it managed to survive; even more, during the Iran-Iraq war it tightened its grip on the state apparatus and the society as well, and defeated its domestic adversaries. After Khomeini's death the regime followed a more 'pragmatic' course and the West made acquaintance with a handful of clerics that presumably controlled the country, and again overlooked the complex factions, ideological currents and power equations within the regime. As a consequence, Hojjatoleslam Khatami's landslide victory in 1997 was a total surprise, as now is Mr. Ahmadi-Nezhad's victory in the presidential elections.