Iraq: a European point of view 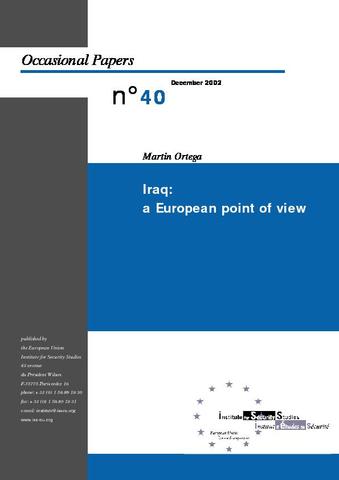 UNSC Resolution 1441 has given the Iraqi regime a last opportunity to abandon any WMD programmes. If Iraq does not comply fully with the resolution or if inspections show that Iraq is indeed hiding WMD, the Security Council will have to consider the situation and decide what measures must be taken to maintain international peace and security.
In the last few months, European governments have responded in different ways to the American desire to exercise ‘pre-emptive action’ against the Iraqi threat and to overthrow Saddam Hussein’s regime. However, the Europeans share a sceptical attitude towards that initiative, since they perceive that a military solution might have unexpected negative consequences. Therefore, most Europeans believe that coercive action should not be taken hastily and that diplomatic means, especially through UNSC-sponsored inspections and destruction of Iraqi WMD, should be exhausted first.
This paper suggests that Europeans are sceptical because they think that the United States underestimates the difficulties of post-Saddam state-building in what is a delicate regional environment. Also, Europeans fear that occupation of Iraq might lead to an escalation of terrorist activities in the West. Some voices in the United States have indicated that creating a democratic Iraq would be the first step in the establishment of a new regional order in the Middle East, while Europeans are unconvinced about the possibility of ‘importing’ democracy into the region overnight by the use of force. Any stable ‘new’ regional order, the Europeans contend, should include a lasting and equitable solution to the Israeli-Palestinian conflict. Finally, most Europeans believe that the international administration of postwar Iraq would have to deal not only with state-building but also with resources management. It remains to be seen whether this aspect of foreign administration would be accepted by the Iraqi population. In addition, lower oil prices would foster increased global oil consumption in the long term and, consequently, a worsening of the global environment, which is against the declared European policy of determined action against global warming.
Although Resolution 1441 states that the Security Council will consider which measures should be taken to respond to Iraqi breaches, the interpretation of that resolution could prove controversial and might lead to three different scenarios of transatlantic cooperation on Iraq. First is a ‘counter-proliferation’ scenario, whereby a wide American-led coalition attacks and occupies Iraq in order to end the WMD threat. In a second possible scenario, some differences between allies lead to an intense debate in the Security Council and within European states, but eventually they decide to act together in order to ‘save the alliance’. The third, more unlike-ly, possibility is the ‘worst-case’ scenario, in which many European states decide not to participate in the military operations, and this leads to profound crises within both the EU and NATO.
Bearing in mind that there is no ‘common’ European position on the Iraqi issue, nor ‘common’ European policy on the Middle East, this paper suggests that members of the European Union should draw up such policies for two reasons. First, the principles and values contained in the Treaty on European Union (which basically coincide with values enshrined in national constitutions) cannot be defended internationally by the member states individually. Second, the European public is increasingly demanding that the EU define a foreign and security policy that contributes effectively to the wider application of those principles and values. This paper concludes that the general principles that should inform a European policy towards the Middle East are already present in CFSP texts: peaceful resolution of disputes, regional rapprochement, promotion of democracy, reduction of excessive importance of oil resources, etc. In order to concretise them in a credible European policy, national governments should negotiate the necessary institutional arrangements. In addition, a European policy on the Middle East would serve as a useful basis for frank and profound discussions with the United States on this vital region. Even though the current Republican administration has not shown particular interest in engaging in such a debate, further transatlantic exchanges are needed if both Europe and the United States really want to sustain their common interests and values.