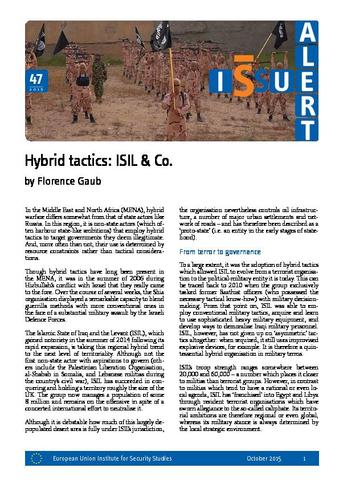 In the Middle East and North Africa (MENA), hybrid warfare differs somewhat from that of state actors like Russia. In this region, it is non-state actors (which often harbour state-like ambitions) that employ hybrid tactics to target governments they deem illegitimate. And, more often than not, their use is determined by resource constraints rather than tactical considerations. Though hybrid tactics have long been present in the MENA, it was in the summer of 2006 during Hizbullah’s conflict with Israel that they really came to the fore. The Islamic State of Iraq and the Levant (ISIL), which gained notoriety in the summer of 2014 following its rapid expansion, is taking this regional hybrid trend to the next level of territoriality.

Hybrid: what’s in a name?