Hungary and its neighbours 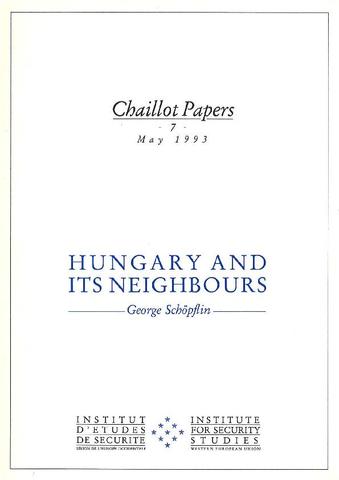 In Europe the collapse of the communist system has given rise to great aspirations to democracy and civil rights. At the same time, new tensions are accompanying this move to democracy, whether in connection with the right to self-determination, minority rights, or the dissolution of former compound states - the USSR, Yugoslavia and Czechoslovakia. In relation to these developments, Hungary occupies a central position: Hungary was for decades in the forefront of reforms and then of the peaceful revolutions of 1989; Hungary is the natural geographical link between the Balkans and Central Europe; and large minorities of Hungarian origin exist today in four of the countries bordering Hungary.The Institute is pleased to have invited George Schöpflin of the London School of Economics to write this seventh Chaillot Paper. In it, he reviews past and present relationships between Hungary and its neighbours. Using the example of minorities of Hungarian origin, the author puts forward in particular a political reflection on contemporary democracy, in which the question of minorities is linked to that of citizenship, and not to ethno-national passions.