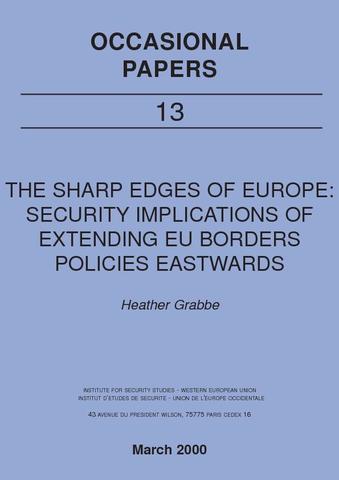 This paper is about the potential consequences for European security of extending EU border policies to central and eastern Europe (CEE), a process currently taking place as the European Union moves towards eastward enlargement. Its central argument is that an inherent tension is growing between EU internal and external security policies in the region to its East. Put very simply, the EU’s external security concerns have caused it to encourage regional integration at all levels in eastern Europe, but at the same time its emerging internal security policies (contained in the newly integrated Schengen Convention, and justice and home affairs cooperation) are having contrary effects by reinforcing barriers between countries.
Section 1 explores the tensions between internal and external security policies by discussing the diverse security-related challenges arising along the EU’s eastern border in the late 1990s, and the political context of policy-making. Many of the ‘new risks’ facing Europe after the Cold War involve borders, but the function of borders in security has changed. No longer used primarily to deter military attack and to keep unwilling populations within communist regimes, borders have become multi-functional. They are seen as something to be overcome (through cross-border cooperation, for example), but also as a discriminatory division between peoples (in visa policy). The applicants are seen by the EU not just as countries to be protected by the embrace of international security organisations, but as being themselves a source of potential danger to EU security at the micro-level. The fear of tanks and missiles arriving from across the Iron Curtain has been supplanted by a fear of uncontrolled immigration and cross-border crime.
Section 2 analyses the EU’s responses to perceptions of different threats as relayed through the policy agenda it has developed for eastern applicants for membership. The way that the EU and its member states have dealt with these challenges has been inconsistent in the 1990s. Partly this is because EU border policies are themselves fragmented and patchily developed, following a chequered history of European integration in justice and home affairs.
EU accession conditions contain a large number of security-related tasks for the eastern applicants, but these are fragmented across a range of documents and agencies. Inconsistencies between the different tasks are emerging, but are little debated in the EU owing to the technocratic nature of EU accession policy-making. Since the early 1990s, concerns to stabilise CEE have led the EU to stress peaceful resolution of bilateral disputes, fostering regional economic integration and sub-regional cooperation initiatives, and integration of ethnic minority groups. However, EU policies for dealing with external borders (including migration and asylum) are having restrictive effects on the movement of both goods and people that are at odds with this emphasis on regional integration as means of ensuring long-term stability and security. A more sophisticated approach to border management is thus needed, one that overcomes the gaps in the existing institutional framework for security policy.
Section 3 discusses the consequences of EU border policies in CEE. The cases of Hungary and Poland show the range of dilemmas in the EU’s effects on their foreign relations of CEE countries, in particular their ability to pursue constructive engagement with their non-applicant neighbours. Disruption of bilateral relationships and regional economic integration has important implications for security in the region. In particular, imposition of EU-driven border policies and visa regimes is inhibiting the ability of local and regional actors to cooperate on a range of sensitive issues, including minority relations, migration, local economic infrastructure, and institution-building.
Section 4 concludes with a discussion of potential future directions for EU internal and external security policies in CEE. It presents several proposals for mitigating the negative consequences of EU policies for European security, calling for: a more inclusive accession policy; an end to discrimination between the applicants in EU visa policies; supplementary financial aid and political support to the countries farthest from joining; more support to bottom-up sub-regional cooperation across CEE; involvement of the applicants in external policies concerning their neighbours; and an overall EU strategy for the region that unites macro- and micro-security concerns. The applicants will have to take on border regimes if their citizens are to gain the full benefits of free movement in the EU; however, the EU’s own long-term security depends on developing flanking measures to mitigate the impact of its border policies on regional integration in the wider Europe.

Enlargement and European defence after 11 September