Even without war, much to worry about in post-election Congo 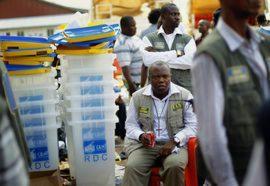 The announcement of the preliminary results of the presidential elections on 9 December in Kinshasa was preceded by a tense calm. Many interpreted it as the calm before the storm.  In anticipation of what might be about to happen, 3,000 people sought refuge across the river in Brazzaville. Talk of evacuation plans circulated, non-essential international personnel had left the country and those who stayed stocked up their supplies. Quite a few Congolese as well as outside observers feared a similar scenario to what happened about a year ago in Côte d’Ivoire. In what follows I will argue that this comparison might be misleading, but that there are still ample grounds for concern about the future course of the Democratic Republic of Congo (DRC).

Indeed, the run-up to presidential and legislative elections in the DRC held on 28 November (and in some areas on the following days) was rife with indications of an impending crisis. On the one hand, there was the increasing polarisation between the government and opposition, particularly the Union for Democracy and Social Progress (UDPS) led by Etienne Tshisekedi who boycotted the last elections in 2006, and the Union for the Congolese Nation (UNC), led by Vital Kamerhe, a former ally of President Kabila who broke with him over the deployment of Rwandan troops in Eastern DRC. Security forces disrupted rallies of opposition parties on several occasions. On the last day of the election campaign in Kinshasa, a UDPS stronghold, three people died and several were severely injured. Other parts of the country faced serious violence as well with seven people killed in Lubumbashi and West Kasai on 28 November alone. Tshisekedi had further fuelled tensions at the beginning of November by calling on his followers to forcibly free political prisoners.

On the other hand, flaws in the electoral process increased the likelihood of a confrontation. After the National Election Commission (CENI) became operational, practically every stage of preparations for the elections was carried out late or was incomplete, including for example the identification of polling stations, the posting of voter lists and the distribution of voting material. Of course, with more than 32 million registered voters, over 63,000 polling stations, 11 presidential and 18,835 legislative candidates (for only 500 seats in the National Assembly) the organisational challenges were enormous, but the overall framework was also not conducive to a fair competition. For example, access to the public media was heavily weighted in favour of the President and his party, and the government sought to suppress critical media coverage.

Nonetheless, on election day itself it was amazing to see voters’ determination to cast their ballots and the commitment of much of the personnel at the polling stations. However, irregularities were reported by the different observer missions including missing material, problems with procedures especially in the case of voters who were not on the lists despite having a voter card and cases of violence in some areas. Problems became more serious with the vote tabulation process that was not only complicated, but lacked transparency especially in the final stages of result transmission. The post-election reports of the Carter Center and the European Union mission pointed out severe flaws like the loss of results from about 2,000 polling stations in Kinshasa alone.

As the credibility of the process was in doubt, rumours about the distribution of machetes in Kinshasa’s slums and the increasing presence of police and military in the streets added up to the feeling of, as the president of the National Episcopal Conference put it, ‘a train running into the wall’. After delays in the compilation process and the release of partial results, it was finally announced that President Kabila won this first and only round in the presidential elections with almost 49 percent of the vote, ahead of his main opponent Tshisekedi who gained little more than 32 percent and Kamerhe with 7 percent. Opposition leaders rejected the results and Tshisekedi declared himself President. This was followed by protests around the country, and violence in several cities, particularly Kinshasa.

However, a Côte d’Ivoire-type scenario is unlikely to materialise, mainly because the electoral race has not pitted two main opponents against each other who both have armed forces at their disposal. Despite a certain potential for mobilisation among his large group of young followers, Tshisekedi does not have established links to armed groups. Furthermore, while the North-South division in Côte d’Ivoire was also prevalent in the 2010 presidential race, there was no similarly dominating division in the DRC elections. First, the prevailing insecurity, particularly in Eastern Congo, largely follows other trajectories than national political rivalries. Second, the West-East fault line displayed in voting in the 2006 elections was much less relevant this time due to the absence of Jean-Pierre Bemba, Kabila’s main competitor in 2006, who is on trial in the Hague, and also due to Vital Kamerhe’s challenging the previously strong Eastern constituency of President Kabila in the Kivu provinces.

Does that mean there is little to worry about? Definitely not. The publication of results by polling station might have eased tensions for a short while, and the opposition has largely refrained from inflammatory rhetoric recently. But the cycle of protests and the heavy-handed response by the security forces which has already cost several lives in Kinshasa and other opposition strongholds continues. Furthermore, with the failure of Kamerhe’s lawsuit at the Supreme Court, which is considered to be biased towards Kabila, official means of contestation are exhausted. Overall, the next moves of the opposition – and the government – are difficult to predict. The argument of the Kabila camp that he would have won the elections even without any of the abovementioned irregularities in the process does not really carry weight as there is simply too much room for speculation and anger. A political dialogue or possibly a re-assessment of results is inevitable.

In this situation it proves particularly problematic that the international engagement has wound down since 2006. It is less the cut-back in financial contributions to the elections, but rather the relative indifference towards the political process in recent years that gives international actors, especially the UN mission, limited leverage. In addition, the results of the legislative elections are still pending. Compilation will be very time-consuming and is liable to have rather more flaws than the presidential tabulation. In many areas the legislative election results have almost more significance than those of the presidential ballot, making them a potential source of serious contention.

Against this background, wait-and-see tactics are clearly out of place. The security situation remains unpredictable, even without a slide into outright war. It seems likely that the DRC will follow the path of other countries in the region with a small circle of ruling elites tightening their grip on the state and a shrinking space for political opposition and civil society.

The consequences can be observed in countries like Burundi where a wave of political killings now seems to have culminated in another round of organised armed response. To prevent such a scenario, the trust of the Congolese people in the political process must, at least partly, be restored – and it seems unlikely that this is possible without some kind of outside mediation. A half-hearted international response might be too little, too late. The European Union needs to follow up on the critical assessment of its elections observation mission, push for a serious examination of irregularities and generally, for a more open political space in the DRC.