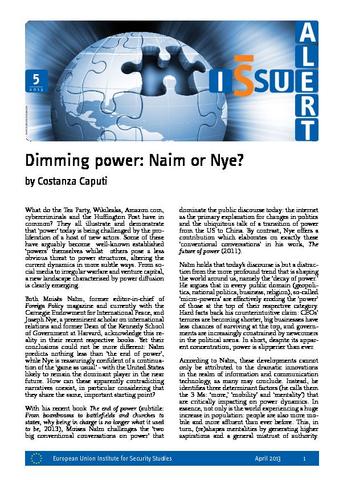 What do the Tea Party, Wikileaks, Amazon.com, cybercriminals and the Huffington Post have in common? They all illustrate and demonstrate that 'power' today is being challenged by the proliferation of a host of new actors. Some of these have arguably become well-known established ­'powers' themselves whilst others pose a less obvious threat to power structures, altering the ­current dynamics in more subtle ways. From social media to irregular warfare and venture ­capital, a new landscape characterised by power diffusion is clearly emerging.

Both Moisès Naìm, former editor-in-chief of Foreign Policy magazine and currently with the ­Carnegie Endowment for International Peace, and Joseph Nye, a preeminent scholar on international ­relations and former Dean of the Kennedy School of Government at Harvard, acknowledge this reality in their recent respective books. Yet their conclusions could not be more different: Naìm predicts nothing less than 'the end of power', while Nye is reassuringly confident of a continuation of the 'game as usual' - with the United States likely to remain the dominant player in the near future. How can these apparently contradicting narratives coexist, in particular considering that they share the same, important starting point?