Getting there: building strategic mobility into ESDP 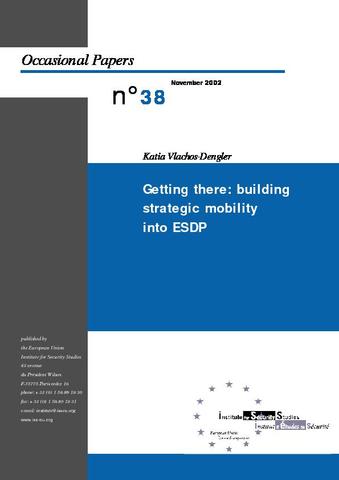 The commitment to create a credible military capability for Europe lies at the heart of European Security and Defence Policy (ESDP). A credible defence capability does not depend exclusively on sound armed forces but also on swift projection of these forces into theatres of operations. A European Rapid Reaction Force will be expected to be capable of intervening in any area where European interests are affected and to intervene rapidly enough to conduct effective crisis management. Given that the most likely future military engagements for European nations will be outside Europe’s borders — due to the absence of a credible strategic threat within Europe — European nations need a broad range of air- and sealift capabilities in order to reach areas of crisis. Current strategic lift capability is not sufficient and not always suited to these potentially global commitments. In fact, strategic lift has been identified on several occasions as an area of deficiency for the fledgling European security and defence capability. To date, Europeans have been dependent on purchased or leased foreign equipment — mostly American, Russian and Ukrainian — particularly for large or outsize loads, since European strategic transport capabilities are often insufficient, obsolete, unproductive, too light or unavailable when needed. In order to ensure the ability of the EU to conduct the full range of missions to which it has committed itself, EU nations must take action to bridge the gaps in critical lift capabilities. Recently, European decision-makers have recognised these gaps and taken some steps to remedy them: eight European nations are planning to build a joint medium-lift transport aircraft, the A400M; France, Italy and the United Kingdom are considering purchasing or leasing heavy-lift American aircraft; the United Kingdom is building six roll-on roll-off ferries to add to its sealift capability. If these undertakings materialise, the next several years will see enhancements to European airlift and sealift capabilities. Nevertheless, existing and planned lift assets do not adequately satisfy the full range of lift requirements implied by the nature and scope of Europe’s potential missions. Several options are available to EU nations. In the short term, in addition to existing programmes, they can cover the shortfalls in their lift capabilities by continuing to use a combination of conventional options. These include leasing and off-the-shelf procurement of foreign military lift assets, as well as short-term leasing, chartering and requisitioning of (mostly) commercial lift assets. In the long term, however, European nations need to significantly improve their own airlift and sealift capabilities and build additional ones. The most affordable long-term solution to European lift deficiencies is one that involves the pooling and integration of national resources. This would allow for more efficient use of limited funds and more effective use of limited capability. A multinational mobility centre, such as a proposed European Transport Command, could manage this European pool of lift assets and coordinate all European transport needs as well as the acquisition of additional lift capability.