The Galileo satellite system and its security implications 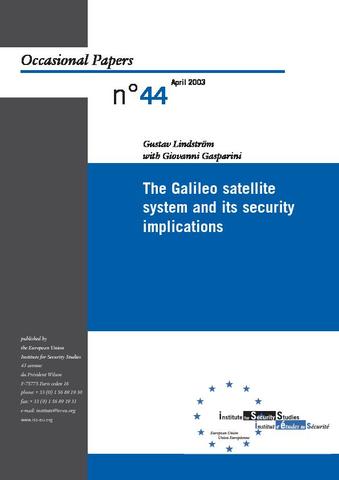 Aiming to reach operational status in 2008, the Galileo satellite system is planned to offer positioning, navigation and timing (PNT) services worldwide. It will join the ranks of the current GPS and GLONASS systems, allowing users to pinpoint their exact locations. While a civilian project, Galileo also has a security dimension. As a dual-use system, it will offer numerous applications in the security and defence field. PNT services give military planners and commanders means to manage assets, troops and munitions more effectively. Given its global coverage, Galileo will offer a large portion of these services to any interested party, thus opening the door for unintended users and uses. This has implications for the EU and its allies. Even if Galileo remains a civilian project, security issues will persist. With a growing number of users dependent on precise positioning services to carry out their daily functions, economic security would be negatively impacted should there be an intentional or accidental service shutdown. Thus, besides protecting the system from unauthorised use, it will be important to safeguard the system to ensure signal continuity at all times. Given the dual nature of the system, it is critical that European policy-makers consider the security dimensions of Galileo and take practical steps to limit its potential misuse. Among the required steps that need to be taken are: protecting the physical and electronic integrity of the system, establishing a permanent EU-US framework to handle outstanding security issues (such as the ‘M-code overlay’), creating a clear chain of command for Galileo, expanding EU capacities to deal with space issues and limiting public regulated service signals (PRS) for security and defence-related purposes.