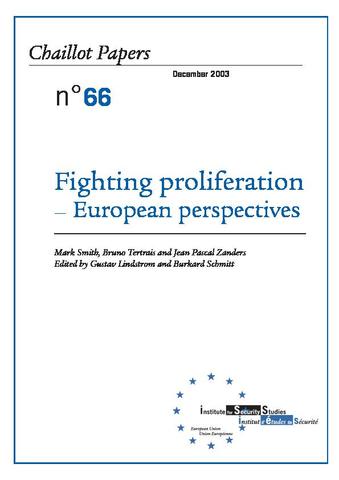 Since the terrorist attacks of 11 September 2001 and the war in Iraq, the proliferation of weapons of mass destruction has become a top priority for European policy-makers. According to the European Security Strategy, it is potentially the greatest threat to the EU’s security, in particular if it is linked to terrorism. Recent events in Iraq, North Korea and Iran have confirmed the importance of WMD non-proliferation strategies for international security. The EU Institute for Security Studies invited three European experts on proliferation to present their views on this issue. In this Chaillot Paper, they provide a detailed assessment of the current state of nuclear, biological, chemical and missile proliferation. In addition, they give an analysis of existing non-proliferation tools and develop, for each area, concrete proposals for effective political action. The findings of this report confirm that WMD proliferation is a serious threat, but that it can be managed successfully if the international community follows up on its declared intentions. In this context, the EU has a crucial role to play, and its recently adopted non-proliferation strategy is an important step in the right direction. The authors treat proliferation as a global issue, but develop their assessments and proposals with a specific focus on the EU. The aim of this paper is to contribute to the overall European policy debate on Europe’s current and future actions in the fight against proliferation.