The fall of the Berlin Wall and German reunification 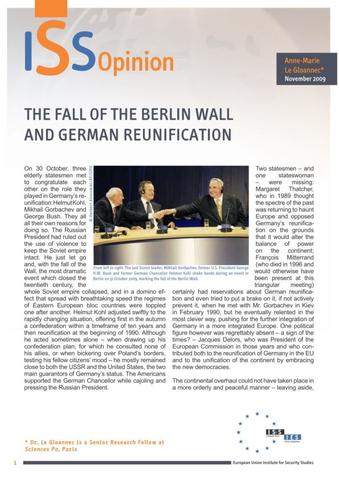 On 30 October, three elderly statesmen met to congratulate each other on the role they played in Germany’s reunification: Helmut Kohl, Mikhail Gorbachev and George Bush. They all all their own reasons for doing so. The Russian President had ruled out the use of violence to keep the Soviet empire intact. He just let go and, with the fall of the Wall, the most dramatic event which closed the twentieth century, the whole Soviet empire collapsed, and in a domino effect that spread with breathtaking speed the regimes of Eastern European bloc countries were toppled one after another. Helmut Kohl adjusted swiftly to the rapidly changing situation, offering first in the autumn a confederation within a timeframe of ten years and then reunification at the beginning of 1990. Although he acted sometimes alone – when drawing up his confederation plan, for which he consulted none of his allies, or when bickering over Poland’s borders, testing his fellow citizens’ mood – he mostly remained close to both the USSR and the United States, the two main guarantors of Germany’s status. The Americans supported the German Chancellor while cajoling and pressing the Russian President.

Two statesmen – and one stateswoman – were missing: Margaret Thatcher, who in 1989 thought the spectre of the past was returning to haunt Europe and opposed Germany’s reunification on the grounds that it would alter the balance of power on the continent; François Mitterrand (who died in 1996 and would otherwise have been present at this triangular meeting) certainly had reservations about German reunification and even tried to put a brake on it, if not actively prevent it, when he met with Mr. Gorbachev in Kiev in February 1990, but he eventually relented in the most clever way, pushing for the further integration of Germany in a more integrated Europe. One political figure however was regrettably absent – a sign of the times? – Jacques Delors, who was President of the European Commission in those years and who contributed both to the reunification of Germany in the EU and to the unification of the continent by embracing the new democracies.

1989: not only Europe's revolution