1989: not only Europe's revolution 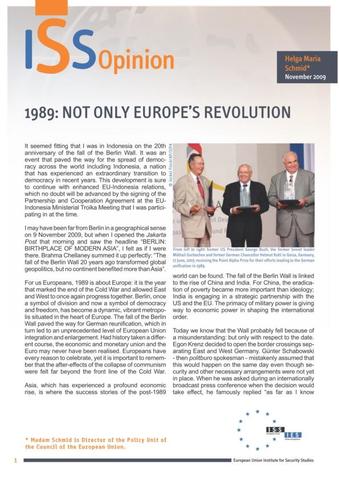 It seemed fitting that I was in Indonesia on the 20th anniversary of the all of the Berlin Wall. It was an event that paved the way for the spread of democracy across the world including Indonesia, a nation that has experienced an extraordinary transition to democracy in recent years. This development is sure to continue with enhanced EU-Indonesia relations, which no doubt will be advanced by the signing of the Partnership and Cooperation Agreement at the EU Indonesia Ministerial Troika Meeting that I was participating in at the time.

I may have been far from Berlin in a geographical sense on 9 November 2009, but when I opened the Jakarta Post that morning and saw the headline “BERLIN: BIRTHPLACE OF MODERN ASIA”, I felt as if I were there. Brahma Chellaney summed it up perfectly: “The fall of the Berlin Wall 20 years ago transformed global geopolitics, but no continent benefited more than Asia”.