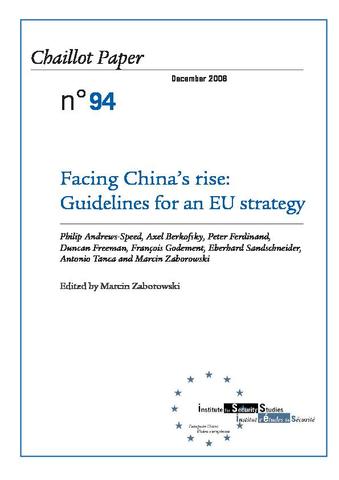 With its booming economy, China is emerging as the key player in Asia-Pacific and possibly as the world’s next superpower. So far, China has mainly developed as a ‘trading power’ – concentrating on the expansion of its economy and retaining a relatively restricted international role. However, there is no doubt that the dynamic rise of China poses major challenges to the status quo in the region with consequences for its neighbours and other powers present there, such as the US and, increasingly, also the EU. What are the implications of China’s rise for the EU? The transatlantic dispute over the arms embargo has highlighted the need for the EU to develop its own security perspective on China, which would address, among others, the issues of China’s defence policy and the modernisation of its military, the security situation in East Asia and Pacific, as well as China’s energy policy. This Chaillot Paper provides an analysis of some aspects of China’s domestic transformation and its evolving international relations with a view to providing guidelines towards the development of effective EU strategic thinking on China.