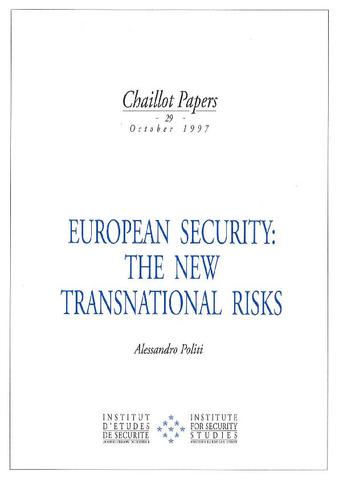 Broad security has become a self-explanatory concept in these times of transition which affect every country with the end of the Cold War and the advent of 'cyberworld'. The multi-disciplinary approach to security is nothing new; its globalization is. The combination has radically altered the signposts of human cohabitation. The terms of the social contract between the citizen and the state have been altered, as transnational phenomena multiply. The rules of the game, nationally and internationally, are nowadays common to every country, big or small, to the north or the south of any imaginary line, and the need for world governance (rather than a world government) is shared by all. Among the new factors that transcend boundaries and erode national cohesion, the most perilous are the so-called 'new risks': illegal drug trafficking, international organized crime and terrorism. Contrary to other global challenges (the communications revolution, water shortages, access to energy resources, financial flows, environmental concerns) they call directly into question the very authority of the state, and are therefore potentially, if not openly, subversive. The European integration process is finally tackling the new threats head-on in 'third-pillar' cooperation between judicial and law enforcement authorities, which have finally accepted the need to pool their constitutional prerogatives in order to preserve them. The enlargement process and increasing cooperation with other neighbouring regions have set this requirement at the top of many international agendas.