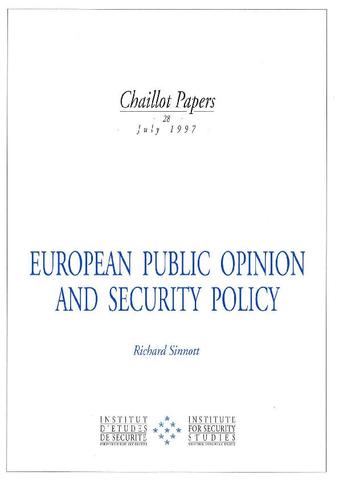 With the end of the Cold War, security has acquired very different components. In Europe, it has broadened to include conflict prevention and crisis management, in an attempt to substitute persuasion for enforcement. It has essentially become a political rather than a military concept whose features are foresight, transparency and accountability, and which combines political and economic as well as military measures. The change of emphasis from collective territorial defence to cooperative security is already producing a disaggregation of the security reflexes that prevailed during the Cold War. Some degree of 'renationalization' of defence postures according to specific geostrategic interests is appropriate and beneficial, provided it generates the national consensus necessary to reconstitute adequate multinational forces. The community of nations, reassured by the disappearance of a clear and present danger to vital national interests, may otherwise become over-exposed to the many international ills and revert to a more egotistical outlook. Furthermore, like monetary matters, security issues are no longer the preserve of high office but must increasingly involve public opinion, for reasons that pertain to both democratic consensus and international legitimation. Intervention in the internal affairs of collapsed states, interposition in civil wars and monitoring of democratic processes have been acquired as developments of international common law. But the right to intervene, albeit only under certain conditions, has not become an automatic duty: the motives and arrangements have to be argued through and explained to the public, on the specific merits of each case.

The democratic legitimacy of European Security and Defence Policy