The democratic legitimacy of European Security and Defence Policy 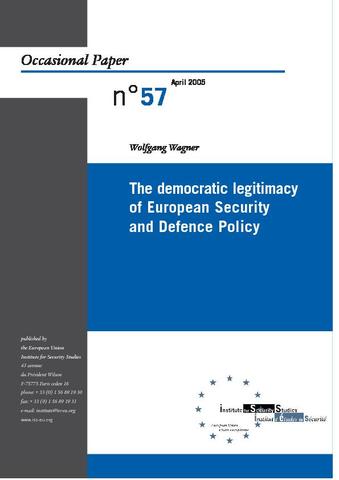 Since the EU has assumed responsibility for military operations, questions of democratic legitimacy have become more prominent in European Security and Defence Policy (ESDP). Although democracy has been a contested concept, four ‘pillars’ can be distinguished that contribute to a democratically legitimate ESDP. This Occasional Paper analyses each of these pillars. The first pillar builds on the notion that democratic legitimacy results from the effective provision of public goods (‘output legitimacy’). As the Europeanisation of security and defence policies helps to provide public goods more efficiently, citizens support or even demand an ESDP. Eventually, legitimacy therefore rests on the concurrence of policies with citizens’ preferences (‘government for the people’). Public opinion can be seen as an indicator of the extent of citizens’ demands for a European security and defence policy. The available data suggest that there has been a permissive consensus as regards the political project of a European security and defence policy. Such benevolent attitudes, however, do not necessarily extend to a European defence policy ‘in action’. Moreover, large variations in support across member states persist. A second pillar has been suggested by adherents of ‘intergovernmental input legitimacy’, who consider the ‘output’ of a political system less important for democratic legitimacy than the ‘input’ into decision-making. From this perspective, a policy is deemed legitimate to the extent that parliament has been able to participate in security and defence policy-making. Adherents of ‘intergovernmental input legitimacy’ emphasise in addition that only national parliaments can provide democratic legitimacy. However, the Europeanisation of defence policy tends to undermine national parliaments’ ability to exercise effective control over defence policy. Input legitimacy at the supranational level constitutes the third pillar of democratic legitimacy. The European Parliament plays a key role in this regard but it lacks the powers to compensate for national parliaments’ loss of powers. Another important way to redress the deficit of parliamentary legitimacy is to strengthen cooperation between national parliaments, which could centre on the European Parliament, COSAC or the WEU Assembly. The fourth pillar is respect for and compliance with international law. It is shown that military operations mounted without a United Nations Security Council mandate lack legitimacy. Nevertheless, the EU has so far abstained from making any explicit statement that EU-led military operations would require a UNSC mandate. The deliberate ambivalence of ESDP as regards such a mandate has weakened the robustness of this fourth pillar of legitimacy. Taken together, none of the four pillars on which the legitimacy of ESDP rests is very robust. In particular, none yet appears sufficiently stable to hold in the event of military operations involving large numbers of casualties.