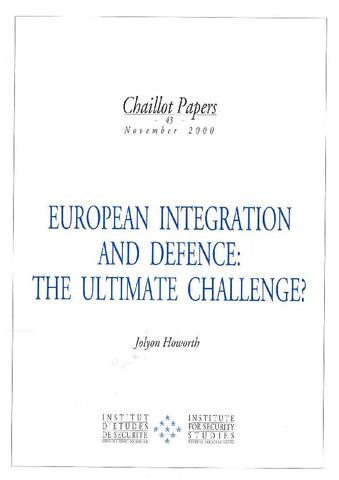 Since St-Malo, three revolutions in European military affairs have been under way: the first concerns Britain, the second the process of European political integration and the third the actual management of security in the post-Cold War world. That is the main thrust of this Chaillot Paper, whose author, Jolyon Howorth – professor at the University of Bath and senior visiting fellow at the Institute in Spring this year – is without doubt one of the foremost historians and specialists in matters of European security. While there is no longer any doubt over the radical evolution in the position of the United Kingdom regarding the Union’s legitimacy in the field of defence, the two other issues on the other hand required serious analysis. And it needed nothing less than the competence, originality and creativity of Jolyon Howorth to examine, in this essay, two of the most fundamental debates that the Union, as an international actor, will have to clarify collectively in the coming months and years. First, is European defence the ultimate launch pad for greater political integration among the Union’s member countries? Will the St-Malo process necessarily lead to a certain sharing of sovereignty in foreign policy and defence – which are above all traditionally a national preserve? Or, conversely, will defence be the ultimate safeguard against political integration to the extent that its intergovernmental regime will allow member states to maintain or even reinforce their national control over the functioning and orientation of the Union? Recent European debates on a federal Europe, the avant-garde, the hard core, the pioneer group, or whatever other formula may in future be adopted in connection with the effective operation of a Europe with thirty members, have so far very largely ignored the impact of defence on the Union’s function and purpose.