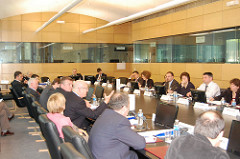 Several unresolved conflicts block the smooth and constructive development of Black Sea regional relations, and many political, economic, environmental and security challenges remain unresolved. For regional cooperation to develop, a stronger sense of regional identity needs to emerge. There was broad agreement that Russia continues to play a predominant – but not always constructive – role in the development of regional relations.

Participants agreed that the EU has become an important actor in conflict resolution processes in the region, but its policy remains rather ineffective. But it was also mentioned that the EU is engaged in a constant process of development of its policy instruments and that the implementation of the Lisbon Treaty will bring more coherence to EU foreign policy. It was pointed out the election of US President Barack Obama could be an opportunity for increased EU-US cooperation in the Black Sea region and the Eastern neighbourhood.