The European elections and Turkey 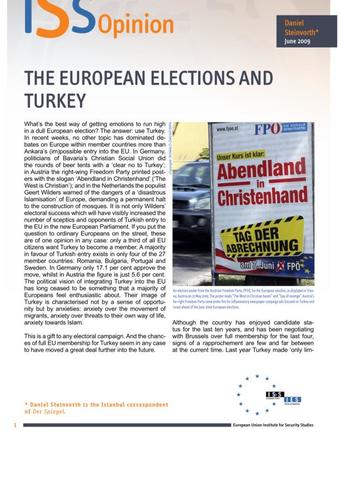 What’s the best way of getting emotions to run high in a dull European election? The answer: use Turkey. In recent weeks, no other topic has dominated debates on Europe within member countries more than Ankara’s (im)possible entry into the EU. In Germany, politicians of Bavaria’s Christian Social Union did the rounds of beer tents with a ‘clear no to Turkey’; in Austria the right-wing Freedom Party printed posters with the slogan ‘Abendland in Christenhand’ (‘The West is Christian’); and in the Netherlands the populist Geert Wilders warned of the dangers of a ‘disastrous Islamisation’ of Europe, demanding a permanent halt to the construction of mosques.

It is not only Wilders’ electoral success which will have visibly increased the number of sceptics and opponents of Turkish entry to the EU in the new European Parliament. If you put the question to ordinary Europeans on the street, these are of one opinion in any case: only a third of all EU citizens want Turkey to become a member. A majority in favour of Turkish entry exists in only four of the 27 member countries: Romania, Bulgaria, Portugal and Sweden. In Germany only 17.1 per cent approve the move, whilst in Austria the figure is just 5.6 per cent. The political vision of integrating Turkey into the EU has long ceased to be something that a majority of Europeans feel enthusiastic about. Their image of Turkey is characterised not by a sense of opportunity but by anxieties: anxiety over the movement of migrants, anxiety over threats to their own way of life, anxiety towards Islam.

A new era in Turkish-Armenian relations

Root causes and consequences of the AKP’s victory