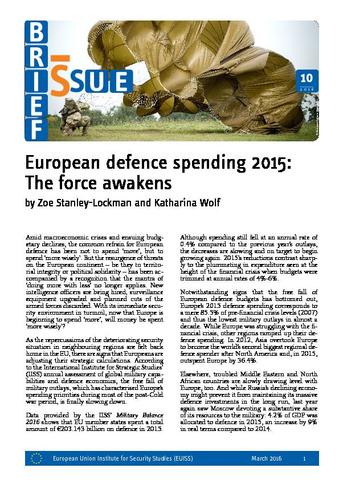 Amid macroeconomic crises and ensuing budgetary declines, the common refrain for European defence has been not to spend ‘more’, but to spend ‘more wisely’. But the resurgence of threats on the European continent – be they to territorial integrity or political solidarity – has been accompanied by a recognition that the mantra of ‘doing more with less’ no longer applies. New intelligence officers are being hired, surveillance equipment upgraded and planned cuts of the armed forces discarded. With its immediate security environment in turmoil, now that Europe is beginning to spend ‘more’, will money be spent ‘more wisely’? As the repercussions of the deteriorating security situation in neighbouring regions are felt back home in the EU, there are signs that Europeans are adjusting their strategic calculations. According to the International Institute for Strategic Studies’ (IISS) annual assessment of global military capabilities and defence economics, the free fall of military outlays, which has characterised Europe’s spending priorities during most of the post-Cold war period, is finally slowing down.