Europe and the challenge of proliferation 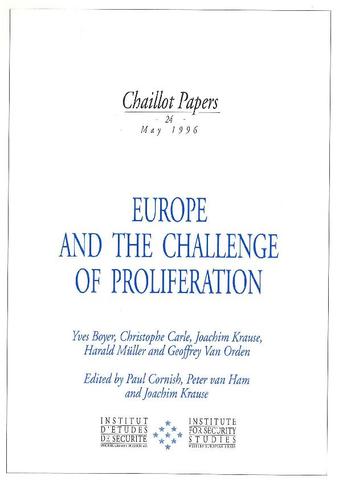 With the end of the Cold War, concerns about the proliferation of weapons of mass destruction (WMD) and their means of delivery have increased considerably. Concerns have been caused principally by the recent experiences with Iraq and North Korea, and, following the disintegration of the Soviet Union, by the smuggling of fissile material and the spread of nuclear weapons technology and know-how. The protracted negotiations over a successor regime to COCOM, which have so far only led to the non-committal Wassenaar Arrangement, also highlight the difficulty of finding a balance between security and commercial concerns. This Chaillot Paper focuses on the main proliferation challenges facing Europe as a whole, and examines the policies which have been formulated by the main West European countries and their security organizations. It addresses a number of key aspects of the challenge posed to Europe by the proliferation of conventional and non-conventional weapons and sensitive technologies. Particular attention is paid to the following questions: (1) what are the main proliferation risks and challenges for Europe? (2) what is the current state of affairs in Europe's response to these challenges? and (3) how can or should effective European non-proliferation policies be formulated? This volume brings together papers which were presented at a conference held in Paris in June 1995, jointly organized by the WEU Institute, the Deutsche Gesellschaft für Auswärtige Politik, Bonn and the Royal Institute of International Affairs, London. They have since been updated, and a German language version will be published in the DGAP's Arbeitspapiere series.