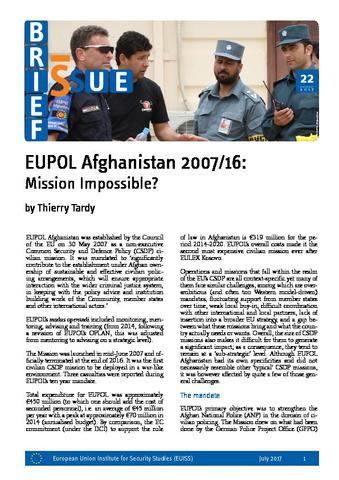 EUPOL Afghanistan was established by the Council of the EU on 30 May 2007 as a non-executive Common Security and Defence Policy (CSDP) civilian mission. It was mandated to ‘significantly contribute to the establishment under Afghan ownership of sustainable and effective civilian policing arrangements, which will ensure appropriate interaction with the wider criminal justice system, in keeping with the policy advice and institution building work of the Community, member states and other international actors.’

EUPOL’s modus operandi included monitoring, mentoring, advising and training (from 2014, following a revision of EUPOL’s OPLAN, this was adjusted from mentoring to advising on a strategic level).

MPCC: towards an EU military command?